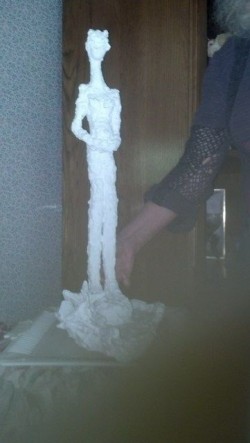 Dr. Margareta Greeley is currently working as an adjunct professor at Rutgers University. She began her artistic career by creating impressive master copies and building up her skills through these paintings. She is an accomplished artist, skilled in drawing, painting, and sculpting. Greeley’s work has been featured on the New Jersey Television Network as well as being shown in some major corporate headquarters such as AT&T, Dunn & Bradstreet, Panasonic, Beil Labs, and the Goodyear Tire & Rubber Company. She has held television lectures, where she has spoken about creativity in education and the arts. Greeley had a solo exhibition in the Summit Public Free Library, called “On the Shore,” and she has received a number of awards and accolades for sculpture, painting and drawing. Throughout her lengthy career, Greeley has developed a very distinct style and works in many different mediums to portray her subjects. Aside from traditional art, Greeley also applies her creativity into traditional house design and renovation. She has renovated and maintained fourteen homes in different regions of the U.S.

This is the second time she has exhibited her work at Alfa Gallery. Her work has also been displayed at the Summit Overlook Hospital, Paper Mill Playhouse and Life Hall Gallery One. In addition to being a member of the Millburn Arts Center, she is a member of the Organization of Independent Artists and the Visual Arts Center of New Jersey.