Born in Mumbai, Madhvi Subrahmanian has lived in three continents and four countries. From this sense of constant change, Subrahmanian thrived off of the challenges of new opportunities and the limitations that came along with them. This artist earned her Master of Fine Arts degree at the Meadows School of the Arts in Dallas. She served as a resident artist in numerous places, including Japan, the United Kingdom, India, and the United States. In Houston, Madhvi was a curator of an exhibition entitled, “Traditions Evolving: Golden Bridge Pottery and Indian Contemporary Ceramics.” She has earned several awards and grants, both in India and the United States. Madhvi has shown in various solo and group exhibitions in Singapore, India, Germany, Taiwan, Switzerland, South Korea, Spain, and the United States. She has also published her pieces in countless publications, such as international books and magazines. As an artist, Subrahmanian infuses these ideas of incubation, growth, and movement in her works. The slow winding nature of her forms appears to encapsulate what lies within, as her pieces are layered with texture and rhythm. Her personal story of growth and passage reveals itself in her pod-like works. 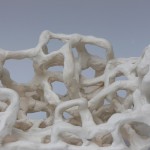 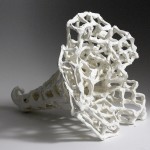