Lou Storey has exhibited his works throughout the New Jersey and New York area for more than 30 years.  He received his MFA in painting from Pratt University  and holds a Master Degree in Social Work from Monmouth University.  Storey currently works with individuals battling drug addictions, whic 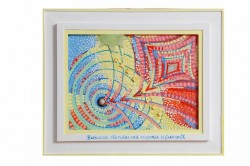 h is reflected in his multi-media works.  He currently works as a clinical psychotherapist and adjunct professor at Monmouth University.  Despite his clinical background, Storey has always considered himself a creative individual from a very young age.  Storey’s long career as an artist has been celebrated with solo exhibitions at both the Rock, Paper, Scissors Gallery in Asbury Park as well as Trinity Gallery in Trenton.

According to his artist statement, Lou Storey’s current works drawn from psychological theories, concepts, and ideas that all relate to his work as a psychotherapist.  Storey’s acrylic paintings integrate original hand-casted three-dimensional material onto a two-dimensional canvas. Storey’s visual vocabulary within his works include concepts of directional motion, bright colors, and elaborate patterns.

Storey uses painting to gain better understanding on issue and problems that are personally pertinent to himself.  When looking at his body of work, Storey noticed a continuity of forms and words.  He decided to produce clay forms of these reoccurring themes, so he can easily duplicate them.  Besides forms, He has not deterred from his use of expressive color, detailed patterns, a heavy influence of motion, as well as a powerful use of language. 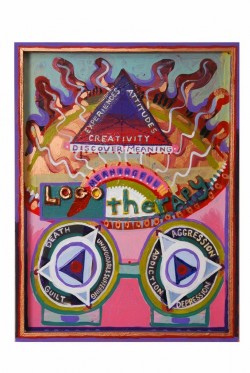