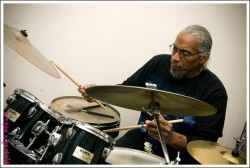 Leopoldo (Leo) J. Gayten was born and raised in Philadelphia, PA. Leo began hand drumming at an early age, when his father bought him a set of bongo drums. As a youngster, Leo was given piano lessons at the age to five from the concert pianist, Mr. Tartaglia. Leo played and performed on the piano through grade school at St. Patrick School in Philadelphia. Upon attending Bishop Neumann High School in Philadelphia, PA., Leo pursued his science education, but also was involved in the high school marching, concert, and pit bands that performed throughout the city. Music became Leo’s passion, and he became a professional at the early age of 16. Leo‘s teachers have been Armand Santerelli, who prepared him for entrance into the Philadelphia Musical Academy (University of the Performing Arts) and performances with the Temple University Orchestra in the percussion section in 1971, after returning from a road assignment with Marriott Hotels. Tony Williams, the master drummer of the Miles Davis Quintet, Elvin Jones, and Joe Chambers were also Leo’s teachers and mentors. Leo comes from a Latino and R&B musical background, but Jazz has always been his passion. Leo now teaches, and mentors young musicians in how to play with a spiritual approach to music. Leo has performed with the Drifters, Charlie Kallas, Phyllis Diller, Virginia Capers, David Brenner, NBC Productions, The Voodoo Band, US Steel Drum Orchestra, along with a host of others, opening for Ahmad Jamal, Johnny Hartmann, and Roy Ayers in New York City and Philadelphia, Pa, and is recently creating sounds with his own band once more New World Order.