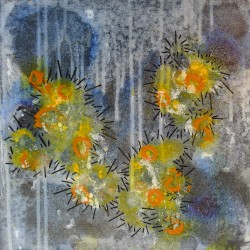 Joanie Gagnon San Chirico portrays the world in her art exactly how she sees it- a beautiful place. However, she admits to staying true to her convictions and to allowing her viewers to gain an awareness that beauty is only skin deep. She is a Signature Artist Member of the Noyes Museum of Art, founder of pFAn (Professional Fine Art Network), and has been represented by several art galleries. Joanie has exhibited her work in several solo and group shows. She is inspired by her environment; in fact, her current series is a detailed depiction of harmful algae blooms and the issues facing the Barnegat Bay area.

Private collections throughout the US and Europe

Form, Not Function, Carnegie Center for Art and History, New Albany, IN 2005