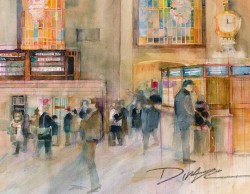 Dorrie Rifkin is inspired by life. She aims to minimize the control aspect of her work,in order to gain freedomthrough painting. She resides inEnglewood, New Jersey where her passion for art and her family continue to fuel her work. Rifkin has been operating as an advertising art director for over twenty years, where she learned to hone her flair for painting. Dorrie’s watercolor paintings are well known worldwide. She has won prizes in several international and national shows. Additionally, she claims a spot as a signature member of the Baltimore Watercolor Society, the Transparent Watercolor Society of America, andthe Northeast WatercolorSociety.  She was also named “One to Watch” in Watercolor Artist’s magazine. Dorrie has also had her artwork featured on NBC’s TV show “PrimeSuspect”. She has had four solo shows, and has also been featured in several group shows. 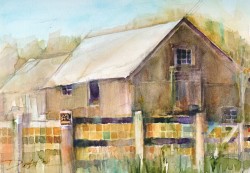