Colleen Gahrmann is many different things to many different people. She is a mother, a teacher, a wife, a friend, and, most importantly, an artist. The work that she currently does in the field of Ceramics gives her an outlet for these heavy narratives that surround her life. Furthermore, her work is a reflection of herself and her influence of nature. Colleen received her B.A in Art Education from Trenton State College and her M.A. in Art Education with a Ceramic Concentration from Kean University. She went on to teach, and is presently substitute teaching at Spotwood Public Schools. Colleen’s work, which is a complete reflection of herself, has been exhibited across the New Jersey/New York areas. 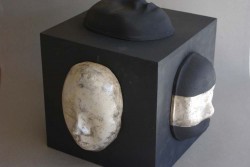