Charlie Katzenbach began her education at Princeton University and then later went on to major in Religion at the NY Studio School and Industrial Arts/Education at the College of New Jersey. She has had experience working in designing and building within her own construction company, as well as serving as a construction division manager in the Princeton Group with the Harrison Fraker Architects. Katzenbach has shown in numerous exhibitions, including her own solo show at the Hopewell Freight Shed Gallery in Princeton, New Jersey. She has also displayed her works in group shows, in both New Jersey and Pennsylvania, and has published her pieces in New Art International. Katzenbach was awarded the Discover Jersey Arts “Artist of the Month” for September 2012. This artist is greatly inspired by the Sri Yanta symbol that pre date to the pyramids and is considered the crystallization of the sound ohm. Her dazzling watercolor images of the Sri Yanta use the reversal of oil on glass and play off mirrors, where the image was removed to reveal the intricate geometric shapes. 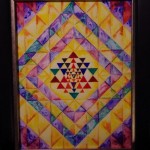 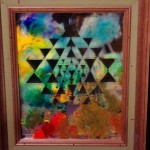 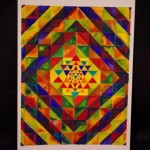