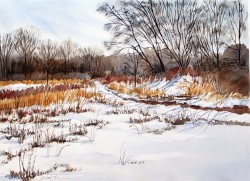 Ann C. Taylor began studying watercolor at the age of fifteen.  She graduated from the High School of Industrial Arts in Manhattan, and then continued her studies at Brooklyn College where she completed her B.A. in Fine and Applied Arts. Ann also studied at The School of Visual Arts, the New School for Social Research, and the Yard School of Art in Montclair, New Jersey.  Now, she is an award-winning Verona watercolorist and the member of the New Jersey Watercolor Society, The Garden State Watercolor Society, and the Essex Water Color Club.  Ann recently completed a two-year term as President of the New Jersey Watercolor Society and is a past president of the Essex Water Color Club.  Her paintings cover a wide variety of subjects, but many include the compositional element of water, and also her love of color and light.  Ann has participated in several juried exhibitions and has had seven solo shows. 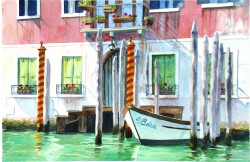 Plus a host of Awards of Excellence and Merit.