Based in the New York City area, visual artist Allyson Block worked in a variety of different mediums including painting, drawing and mixed media sculptors.  She resides in New Jersey with her family and exhibits her works throughout the Tri-State Area. Block graduated from Brandeis University in Waltham, Massachusetts where she received a B.F.A.. In addition, she has also received a Post-Baccalaureate certificate from the School of the Art Institute of Chicago. Block has shown her work in galleries throughout the country. 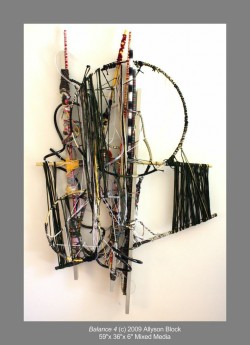 Allyson has mastered multiple types of media used in her art, however for the Fall NBAS 2013 exhibition, the gallery chose to show a series of her mixed media wall sculptures.  These abstracted forms are composed of wood, yarn, and wire.  These contrasting media create a textured composition, whose three dimensional qualities leap from the wall and invade the viewers space. Although the shapes created are placed in a systematic manner, they are not placed in a confined space demarcated by a frame.  These flourish in their liberation, stretching across the wall and promote their tangible qualities to the viewer. Allyson’s sculpture Balance 4, for example incorporates the use of different lines and shapes and colors that are unconstrained. There is indeed a balance between sharp lines, sinuous circles, heavy bondage and the open space within the composition.