Maria Alejandra (Alex) Bigatti was born in Argentina, where she grew up and attended the University of Buenos Aires and graduated from its School of Architecture and Urban Planning with a degree in Architecture. After marrying, she moved to Southern California and worked as an architect for several years.  Later she and her husband moved to New Jersey and began their family, which now includes their two sons and dog, Milu. 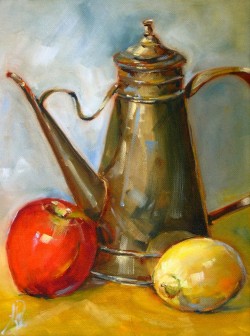 She loved drawing, painting, and modeling with clay from a very young age. As she pursued her interest in these different media, both on her own as well as under the direction of other artists, she developed her own style of figurative and abstract painting using watercolors, acrylics, ink, and oils, as well as her own sculpting style using clay and plasticine. Her work has been featured in many shows, both juried and non-juried, and belongs to both nationally and internationally owned private collections. In addition to these accomplishments, she is a member of the Center for Contemporary Art.

Bigatti’s work is emphasized by vivid colors and brushstrokes. Her landscapes and still-lifes convey a sense of movement and liveliness that are enhanced by stylistic elements such as color scheme and brushstrokes. All of these factors creates an original interpretation by the artist, which thusly becomes an original journey for the viewer. Her still-life, “S.L with Apple and Lemon”, demonstrates the artists mastery of use of shade, light, and forms, rendering simple everyday objects into a sublime and peaceful image.