In the 18th and 19th century, Art Salons were the greatest annual or biannual art events in the Western world, celebrating the farthest advances in academia and the arts. The Alfa Art Gallery, in order to bridge talented and highly esteemed artists with the New Brunswick public, holds its own Art Salon exhibition biannually in the Spring and Fall/Winter. As the second of 2010, this New Brunswick Art Salon exhibition “Aftershock: Lines and Vibrations” closes Alfa’s successful year of promoting the arts.

The title of this exhibition “Aftershock: Lines and Vibrations” implies consequence in viewing the works of our three stylistically different artists. Though the works of Alexandra Pacula, Jen Mazza, and Marsha Goldberg emerge from different intentions. Their intense marks share a common ground in resonating lingering messages or sentiments into the viewers. Pacula’s work, containing blurred scenery simplified into humming lines, drugs the audience into becoming part of a night scene that references to excitement, opportunities, seduction, and anxiety. Mazza’s work, containing colorful explosions in an otherwise muted image, trembles with an aftertaste of alarm. Goldberg, with her untamed lines, brings a slow realization of an intangible and ineffable feeling. The debut of these three artists at the Alfa Art Gallery will be nothing less than an earthquake! 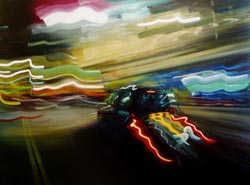 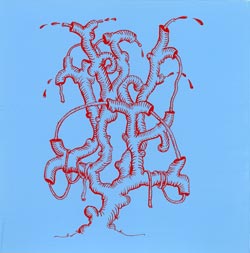 Jen Mazza received her BA from Mary Washington College and her MFA from the Mason Gross School of the Arts at Rutgers University. She has exhibited throughout New York and New Jersey. Her most recent paintings were displayed in the one person exhibition “Self Deceit” at the Jersey City Museum and in a solo project at the Aljira Center for Contemporary Art. Mazza has received two Individual Artist Fellowships from the New Jersey State Council of the Arts and praise from the NY Times and the Star Ledger.

Deeply moved by the destruction wrought by bombings, the creations of Jen Mazza were made in response to the conflict between Israel and Lebanon. Choosing to use images of idyllic American landscape, Mazza used the color of water-based mediums on black and white to exemplify the shock is closer to home than one would think. Small in sizes, the pieces become intimate, up close, and personal. 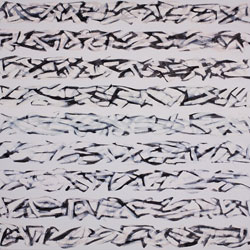 Marsha Goldberg obtained her BFA from Boston University’s School of Fine Arts and her MFA from Mason Gross School of the Arts at Rutgers University. She has exhibited in several galleries and institutions, including the DeCordova Museum, the Boston Public Library, and the Fogg Art Museum at Harvard University. Goldberg was also a founding member of the Brickbottom Artists Building in Somerville, MA, one of the country’s largest artists-owned studio buildings.

The artworks of Marsha Goldberg strike their audience with intrigue upon first impression. With careful attention to the marks, the viewer receives a range of sensations equal to the slightly frenzied but eloquent nature of the lines. According to Goldberg, in their resemblance to text, these marks are comparable to what a traveler in a foreign country may see in the language, only understanding it as a decorative line or picture. Beautifully simple yet poignant, her calligraphic lines are created with an attitude of free association, often in response to music.