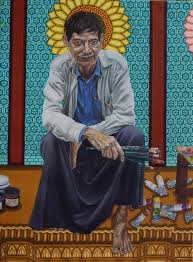 Expression, fulfilling composition, and meticulous attention to detail combined with exquisite use of color and pattern, make for a stunning portrayal of the subject matter. Here the artist has given us a view of a gentleman who has become the true adult, encompassed or defined by his only real calling as an artist. He sits stoically glaring, centered within an exquisitely detailed composition which almost seems halo-like in the background. The work is beautifully rendered and masterfully completed.

The primary attention of this work is garnered through its wonderful use of light and dark tonal values. Small in scale it does not cease to capture the attention of the viewer with a sense of mystery almost bordering on dread, yet with a contradicting sensuality surrounding it. The artist has made good use of compositional elements by placing the central figure in a reclining pose shrouded in the ambiance of a distant light combined with an ambivalent background, making for a gripping image.

It is folklore meets The Star Spangled Banner. This work captures the dynamic sense of a native American heritage and at the same time creates a stunning portrait of age in its most primal sense. There is a certain feeling of the entire piece being a relic itself, just as the main subject matter is depicting. The use of red, basically as a monochromatic work adds to its presence in a strong deliberate fashion throughout its detailed intricacies.

In a stylized adaptation of classic portraiture, the works sets up an interesting exploration of the human portrait as it peers out at the viewer through a riveting and mysterious manner. Given the technique used to create this abstraction, the viewer is forced to ask the question, “Was the subject matter derived from a live individual or a facsimile?” The deliberate and successful use of its unclarity lends one to discover and sift through the image making process, leading to exploring the possibilities of its underlying meaning, if any at all.

Title: A Break In The Clouds

The abstracted landscape materializes within the means of a soft but striking palette. It gives the viewer a window to observe the distant horizon through, while feeling immersed within the composition itself. The muted and subtle transition of tones add to an exploration of a serene sense of being, while adding a sublime depth to form.

In this work the viewer is taken through a visual journey leaving one left to explore the endless possibilities of the artist’s process. It is an engrossing combination of several divers media which becomes visually stimulating as a whole. The use of text adds an interesting and hidden dimension to the entire composition and draws one’s attention in closer to contemplate the visual imagery abounding throughout.